ISLAMABAD: The monitoring mechanism reflected in the Supreme Court’s landmark judgment for the accountability courts is well within the parameters of judicial functions of the Supreme Court and a practice that is going on for years.

However, the judgment has been grossly misinterpreted by some to show that it amounts to interference in the functions of the executive branch.

Independent sources in the Law Ministry confided to The News that all the special courts, set up in the past or are functioning right now in Pakistan, have been and are being monitored and supervised by the apex court, which adopts such monitoring mechanism to ensure that cases pending before the courts concerned do not get delayed unnecessarily.

The sources believe that those feeling uneasy with the monitoring mechanism announced in the Dec 16 judgment for the accountability courts are deliberately creating confusion to prove this judgment as a move by judiciary to interfere in the executive functions.

These sources said such elements are said to be oblivious of the fact that a similar monitoring mechanism is working in the apex court for anti-terrorist courts.

Even for high courts and the subordinate judiciary, a comprehensive monitoring mechanism is presently in place as part of the national judicial policy to ensure quick disposal of cases and to clear the backlog.

Following the government’s complaint that the terrorism cases are not timely pursued and result in increase in terrorism, the present Supreme Court under Chief Justice Iftikhar Muhammad Chaudhry had set up an effective monitoring system to keep a vigilant eye on the anti-terrorist courts so that no unnecessary delay could occur in such cases.

Under this monitoring scheme, Justice Javed Iqbal serves as a monitor for anti-terrorism courts of Sindh; Justice Khalilur Rehman Ramday oversees the ATCs in Frontier; Justice Nasirul Mulk supervises the Balochistan ATCs; and Justice Sardar Raza Khan is monitoring the performance of the Punjab ATCs.

Neither anyone had objected to this monitoring mechanism for the ATCs nor was any objection raised for such overseeing strategies adopted in the past for the special courts during the last three decades. However, the sources said a vested interest group is deliberately trying to create confusion for the monitoring mechanism evolved for the accountability courts by the Supreme Court.

In its latest judgment, which has unnerved many powerful and mighty in the government, the Supreme Court clearly said this mechanism is evolved to “monitor the progress and the proceedings in (NAB) cases”.

Since the NRO beneficiaries and their sympathisers were generally complaining that the cases terminated under the condemned NRO remained undecided for over 10 years, this mechanism was evolved to address these complaints and ensure the NAB accused get quick justice.

The NAB has been condemned by the NRO beneficiaries while the Supreme Court also found its incumbent chairman, the prosecutor general and the deputy prosecutor general incompetent. Therefore, the apex court judgment directed the Bureau to transmit periodical reports of the actions taken by them with regard to NAB cases to the Monitoring Cell of the apex court set up following the same order.

Interestingly, similar directions were given to all the provincial governments under the national judicial policy to ensure that the challans in criminal cases, pending before the lower or superior judiciary, are submitted by prosecution within the stipulated time period to avoid unnecessary delays in dispensing justice.

In a remarkable judgment by 17 member bench headed by Iftikhar Chaudhary, Supreme Court of Pakistan has declared NRO as unconstitutional from the day of issuance.

As a result of this judgment all the cases closed by NRO are reinstated on the positions of 5th October, the day General (R) Musharraf issued the order of National Reconciliation Ordnance (NRO).

According to the judgment of SC 17 member bench the NRO is contrary to the equality of all citizens in front of the law guaranteed by the 1973 Constitution of Pakistan.

1) All the High Courts will make sure that cases reopened by this judgment get a fair trial, proper investigation and proper legal procedure.

2) Government is responsible to pursue the cases in Swiss court against Asif Ali Zardari and team.

During the proceedings Chief Justice also made clear that even parliament has no right to change the basic structure of the constitution.

The court has also shown displeasure on Acting Attorney General Shah Khawar and said he hide the truth.

The judgment is welcomed by a majority of legal community and civil society considering it another milestone towards to goal of real independent judiciary and rule of law.

Finally the ever awaited list of National Reconciliation Ordinance (NRO)  is out which has names of 8,041 beneficiaries out of which only 34 are politicians and rest are from bureaucracy , criminals, businessmen and other accused.

There is a huge demand from various corners of the society to take resignations voluntarily or in voluntarily from the people who benefited from this law and are still serving in the government.

The point of view of government as presented by federal minister for information and governor of Gilgit-Bultistan Qamar Zaman Kaira is that demanding resignations from NRO beneficiaries uncalled for.  The reason he gives is one will have to differentiate between charges and crimes and that nothing has so far been proved against the NRO beneficiaries which on principle seems to be OK! But can the information minister inform us about the pending cases and trials of common people in courts who have to justify their innocence before law to get acquitted and if the NRO angels where innocent then why they took refuge in a dictator’s shelter of NRO.

The question here is of morality and social justice that why an elite group of people found it necessary to get a clearance certificate through a draconian law instead of facing the courts whereas a common man has to face years of trial to get justice.

Still no full list of beneficiaries and cases is provided to the people and media.

We also demand the list of people who got benefits from loan forgiveness or unfair settlements through corrupt political and banking practices. 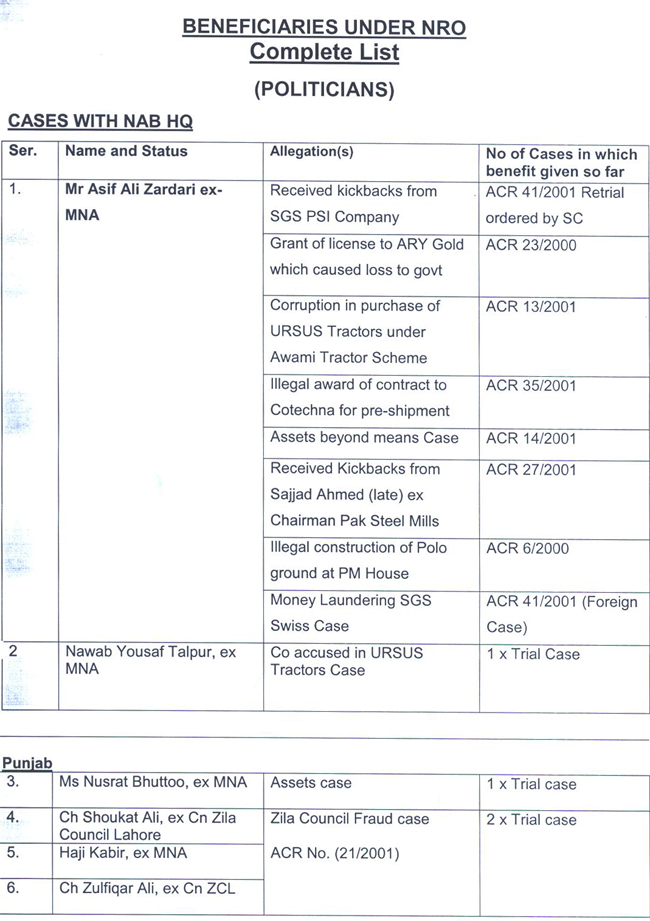 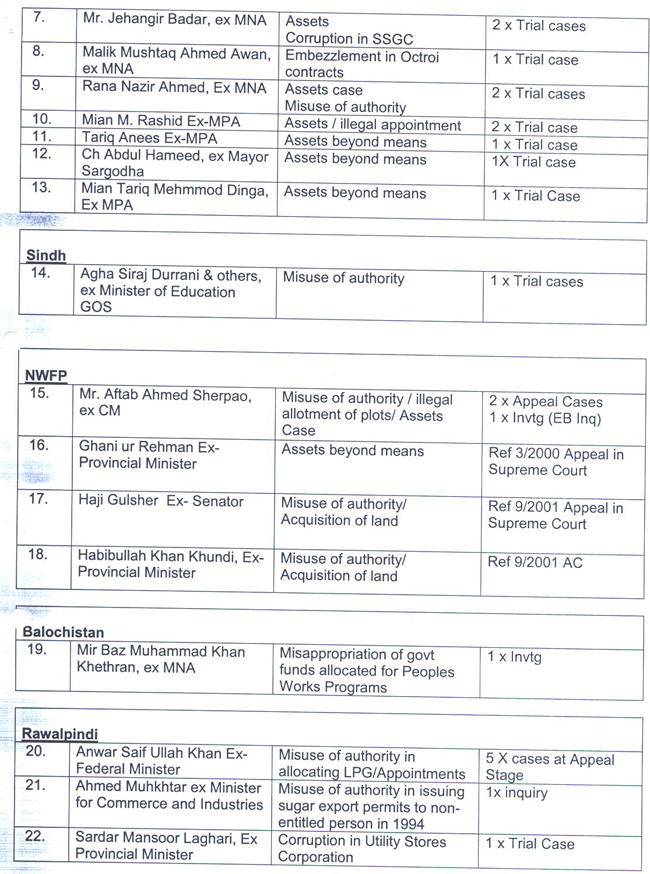 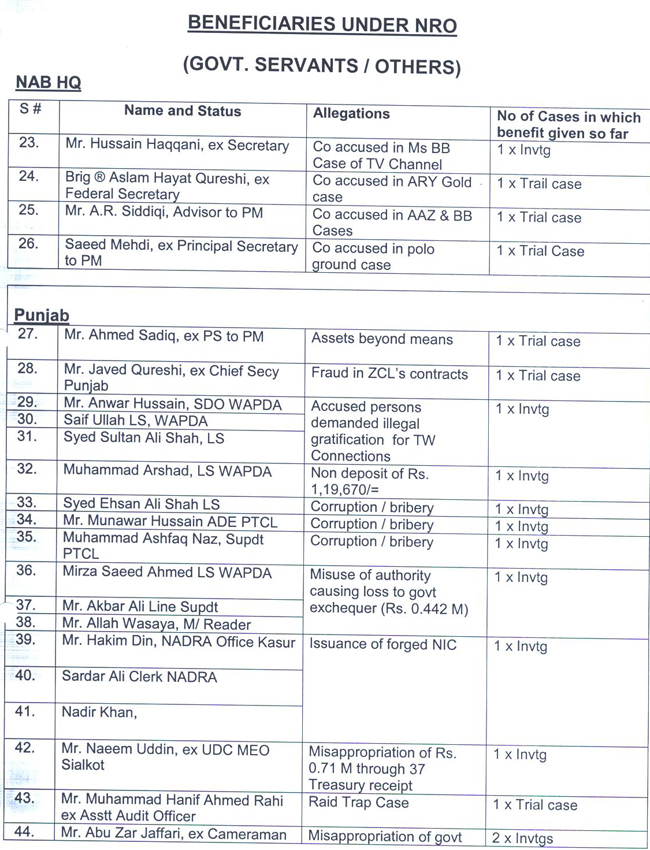 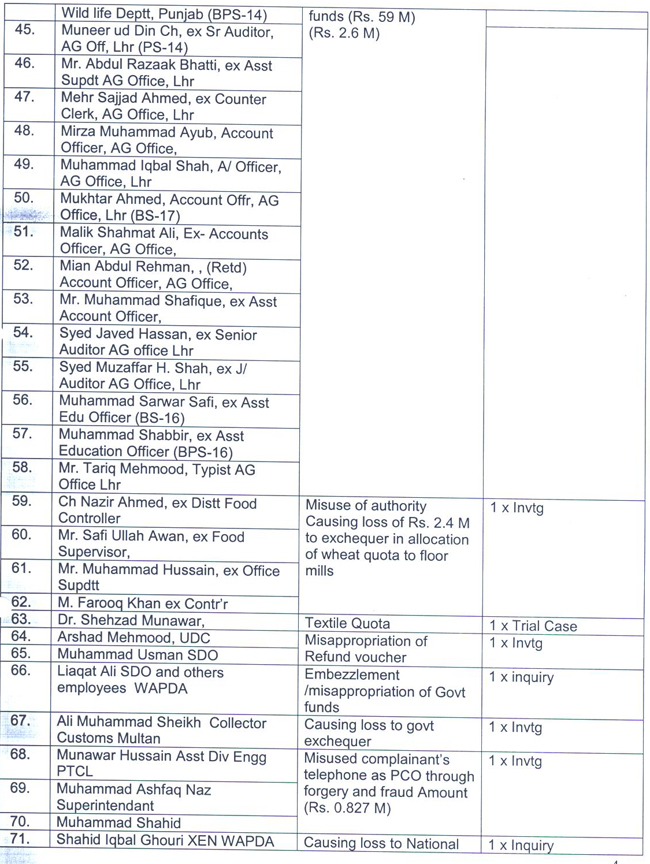 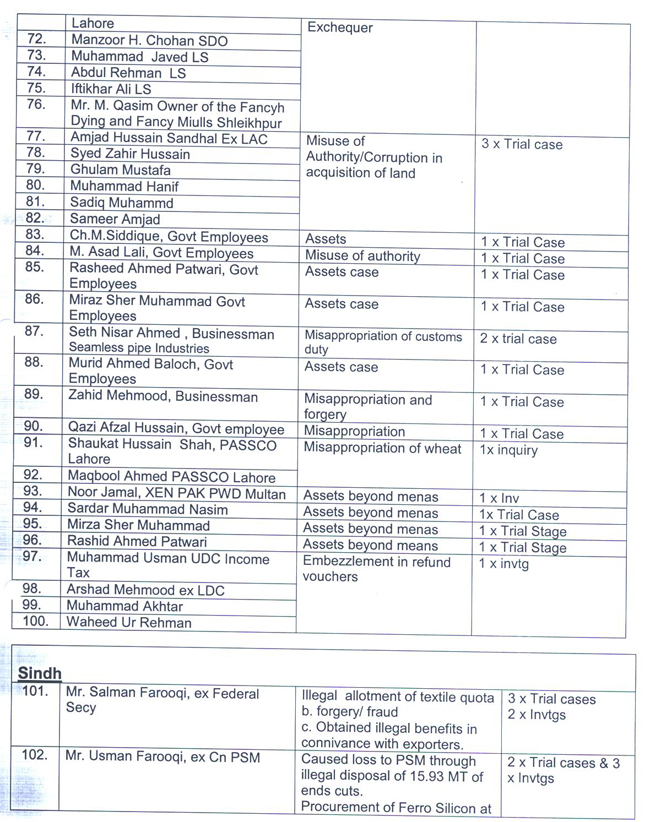 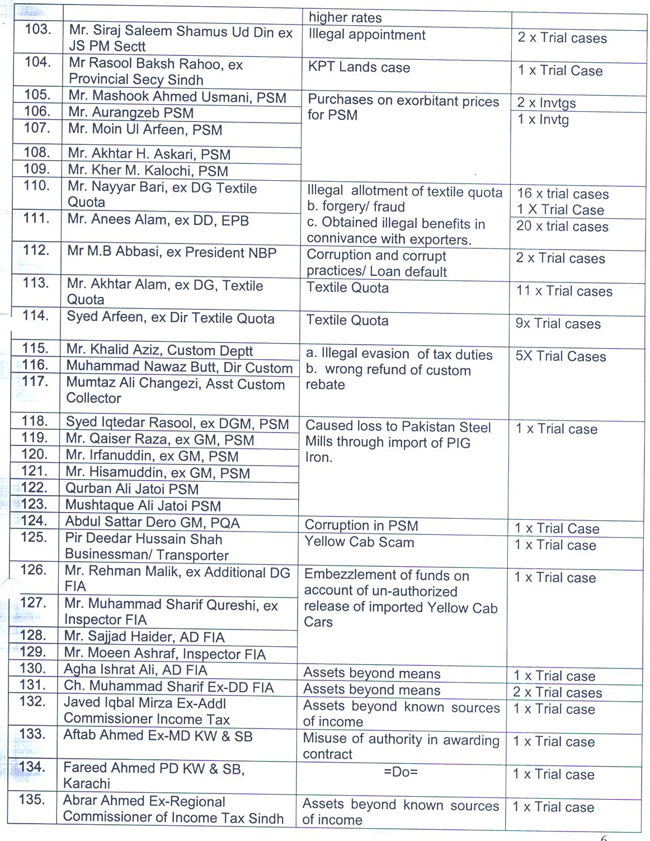 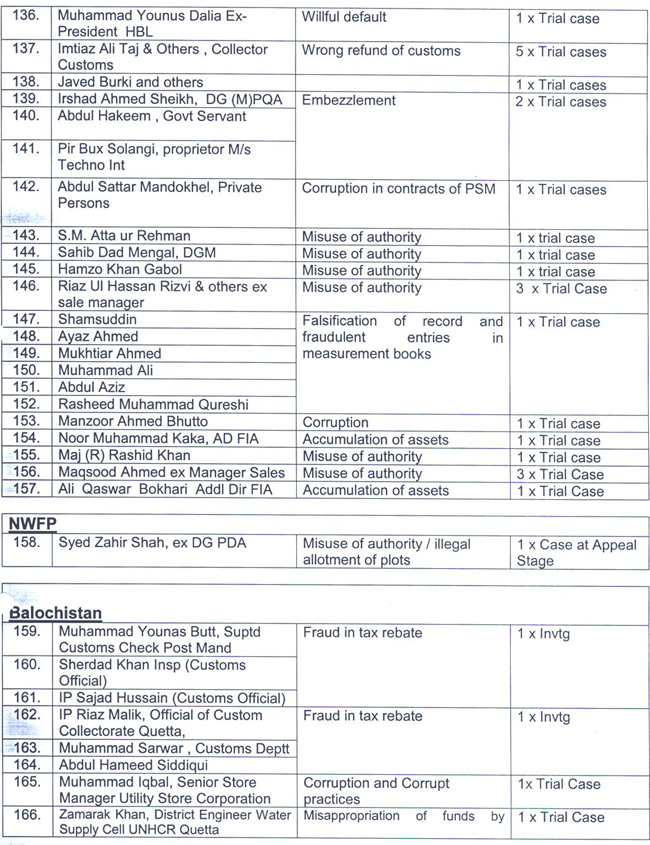 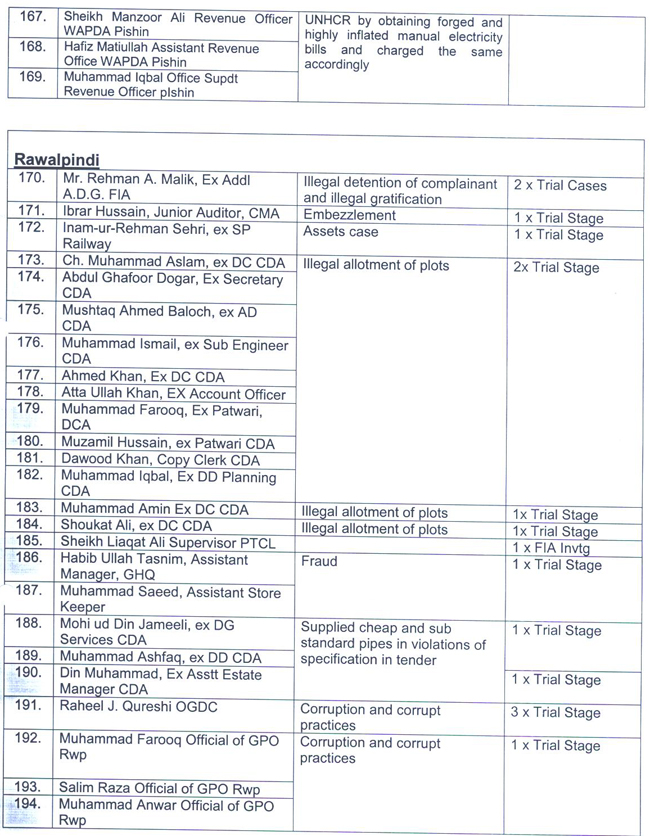 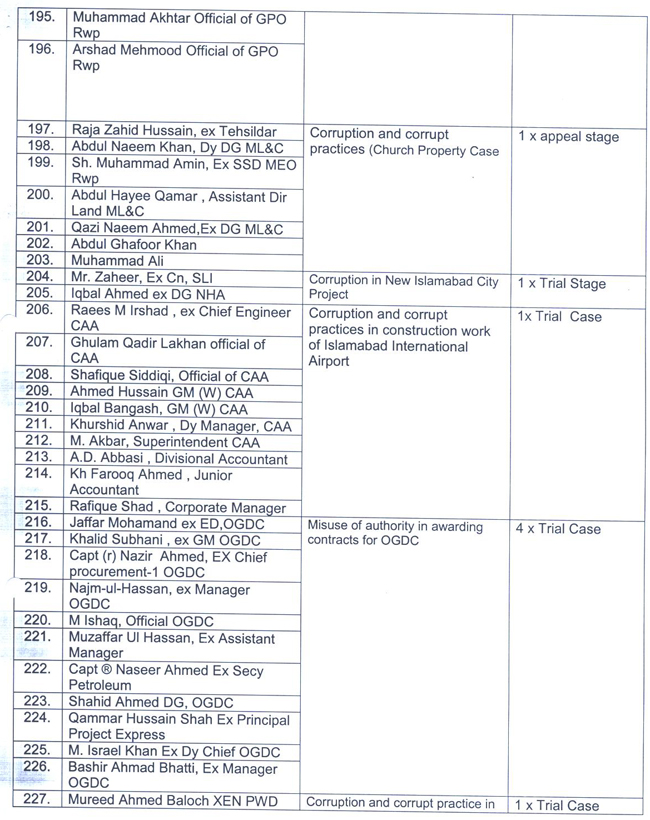