The process of destabilization in the middle east region which started with 2003 invasion of Iraq is now taking more deadly turns. Aleppo and other Syrian cities are facing genocides of people from pro-Assad forces backed by Russia and the Khomenist regime in Iran, and also from the hands of ISIS.

The countries which started this war mess in the middle east especially US, UK and the countries who supported them are not even accepting refugees.

It is the prime responsibility of OIC countries especially bigger countries like Pakistan, Indonesia, Turkey etc. to stand up and start a peace process in the region. At the moment USA, Russia and Iran are playing their super power game in Syria at the cost of innocent lives.

Saudi Arabia and other GCC cannot be trusted with any peace process either as they are playing their own power games at the cost of human lives in Yemen.

People around the world who believe in justice and humanity should raise their voice on the issues.

If the ongoing genocide in Syria doesn’t end then I am afraid that it will create more sectarian hate based wars in the region.

I hope some sense will prevail and someday in-sha-Allah we will see peace in the region.

I have been writing for some time against crimes committed by the Pakistani/USA and other forces in this fake war on terror and Israeli occupation and bombings of Palestinian territory. I have also been observing the reactions of people against and in favor of both operations, wars, genocide or mass murders (Whatever you want to label them).

What I see is that most of us believe in the concept of humanity but for most people the main issue seems to be their definition of the entity called “human”.
The definition seems to be greatly dependent on race, religion ,sect, nationality, political ideology and other sources of discrimination. This discrimination blinds many people to the extent that they start considering the lives of a 2 years old on one side of the conflict as less important one than on the other side of the conflict.

If we look at Israeli attacks over Gaza and Pakistan army attacks over FATA then we will see that there is not much difference between Benjamin Netanyahu and Nawaz/Raheel Sharif operations. Same logic of targeting particular groups but in reality damaging lives and properties of common people. Also there is not much difference between pro-war Israelies who were shown on the media enjoying bombings over Gaza and pro-war troop worshipers and fake liberals (In reality sectarian and social class fascists) of Pakistan who support and enjoy aerial bombings and heavy ground bombings over populated areas of FATA. Not to forget another thing. Israel and Egypt’s dictator Al-Sissi both have closed their borders for Gaza refugees and here in Pakistan both Sind and Punjab are doing the same with IDPs.

Ask a Pakistan army supporter about Israeli actions and he will use the all the harsh words he or she has against the Israelis and will condemn the attacks strongly. Ask him if these attacks are similar then you will receive harsh words for your self and things like, “There is no general public living in Waziristan & FATA area where Pak Army is doing bombing.” Similarly ask an Israeli army supporter about war in Gaza and similarity between their actions and the actions of Hitler’s Nazi Germany and he will say ” There is no general public living in GAZA area where Israeli Army is doing bombing”

Reality is people don’t care as long as its their men doing their job and it’s not our head facing the bullet or bombings.

No one is asking from Pakistan army that which high-profile targets were targeted? what are the identities of all those hundreds of so-called Uzbaks? what is the proof that all these so-called Uzbaks were terrorists or they were the refugees we accepted for many years or they were from the younger generation of the old soldiers Pak/US trained to fight the Soviets or were they common tribal people?

Similarly not many in Israel will ask their army about the hatred these bombings will create in the region against Israelis or how long can they bully the whole region and how the actions are different from what Hitler did?

The thing is that long as boots on the ground are our’s , bombs from sky are our’s and it’s not us or the people we care are being targeted, all is OK!

We need to oppose the idea of using aerial bombings over civilian population areas (whether so-called enemy areas or so-called our areas) on principle not on prejudices.

Fear of the other kind is a useful tool in the hands of people like Hitler, Netanyahu, Pakistan’s very own dictator Yahya, Musharraf, Bashar al Assad, Stalin, Mussolini, Bush, Obama and others like them.

It’s up to the common people to reject this “creating fear and controlling masses” policy. We need to do it not just for the other side and their rights as humans but also for our rights and freedom too.

Wrong actions and policies, if accepted as norms or principles will eventually hit us too and we will have no moral justification to oppose such actions if we would have supported them in the beginning against other people.

The holy month of Ramadan is coming and it is coming at a time when we already have an estimate of more than 2 million (Internally displaced persons) IDPs due to earthquake, floods and various military operations. Now the latest military operation, Zarb e Azb has added around .45 to .6 million new IDPs. I have been criticizing this operation and the way military establishment and their puppets in politics are destroying the country but the real damage is done to the civilians who have to leave their homes and lose their properties, lives of their loved ones and their localities for migration towards other areas. Sind and Punjab governments, despite being the supporters of this war have banned the entry of these IDPs in their provinces as if they are some lesser citizens of this country or they belong to a lesser race. PMLN allied Baluchistan government has also shown no sympathy towards these IDPs. Its only Khyber Pakhtunkhwa (KPK) is the only government which is taking care of these refugees. We were not able to stop war but we can reduce the pains of those who are suffering because of the bad actions of our rulers and policy makers. Below are some of the charities who are doing some good work to take care of these refugees:

Another good one and with presence in the area is Al-Khidmat Foundation: 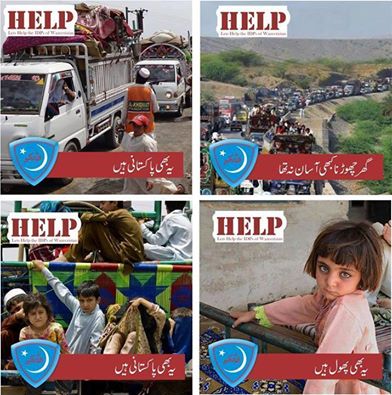 If you know some more charities working on the ground then please feel free to share them in the comments.

According to ISPR, Pakistan army has also setup some camps like USA does in Afghanistan after destroying villages. My suggestion is not to give donations to them as they will use that for publicity stunts which are then used for more bombings. What logic is this that first you bomb them and kick them out of their houses and then bribe them to win their loyalties by giving them a fraction of dollar payments you received from your masters in the form of coalition support funds?

I don’t know how our nation will ever recover from this war. A nation which was already suffering from poverty and illiteracy got struck by a massive earthquake resulting in a huge humanitarian and financial loss is now facing probably the worst crises of its history after 1971 East Pakistan separation.

When our leaders will learn that war is not the solution for our problems ? It will destroy us but I think they only think in terms of dollars.

The U.N. refugee agency reports thousands of people are fleeing Pakistan’s South Waziristan region in anticipation of military operations against insurgents. U.N. agencies estimate more than 100,000 people have become displaced since May.

Pakistan’s Northwest Frontier Province is awash with homeless people who fled the fighting between government troops and Taliban militants.

The most dramatic exodus occurred earlier this year when more than two million people fled their homes in the Swat Valley.

UNHCR spokesman, Andrej Mahecic, says his agency does not expect an outflow of people on that scale from Waziristan. Nevertheless, he says a substantial number of people are fleeing to safer regions.

“In recent days, local authorities have begun registering new arrivals, with more than 800 families registered over the past three days out of an estimated 2,000 families that have moved into that area,” he said.

“While some of the movement from South Waziristan may be seasonal migration, most families say they are fleeing expected bombardments. If full-scale military operations are launched, the numbers of displaced people are likely to rise significantly,” he added.

Mahecic says most of the displaced are staying with host families or have rented rooms. He says the UNHCR is working with local partners to distribute relief supplies, such as plastic sheets, sleeping mats, jerry cans and kitchen sets to displaced people from South Waziristan.

In the meantime, spokesman for the World Health Organization, Paul Garwood, says medical supplies in the region are insufficient.

“Water supplies to health facilities are reaching only 42 percent of these health facilities,” he said. “So, there is a great lack of water. Medical staff, particularly female health staff, are in short number and the health cluster has received only 37 percent of funding requested,” he stressed.

The U.N. agencies say the deteriorating situation in Pakistan continues to hinder their humanitarian operations in the country. In addition, they say they have had to adjust their operations in the wake of attacks on U.N. staff and general insecurity.