I felt some hope today when I read a group of Jewish people in Israel showed solidarity with the children of Gaza by protesting in Israel against the genocide of Palestinians by Netanyahu regime.

Salute to these people who took part in the protests organized by Jews Against Genocide (JAG) movement.

People who have suffered the horror of a genocide should feel the pain especially when their own government is doing the same with Palestinians.

When Hitler was doing his massacre of humanity, there were people like Oskar Schindler in Germany who were keeping the humanity alive.

I am glad to see the other side of Israel which shows there is still a chance of peace.

Fear of the other kind is a useful tool in the hands of people like Hitler, Netanyahu, Pakistan’s very own dictator Yahya and others like them.

Its up to the common people to reject this “creating fear and controlling masses” policy. We need to do it not just for the other side and their rights as humans but also for our rights and freedom too.

Wrong actions and policies, if accepted as norms or principles will eventually hit us too and we will have no moral justification to oppose such actions if we would have supported them in the beginning against other people.

According to a news on Stopwar.org.uk: 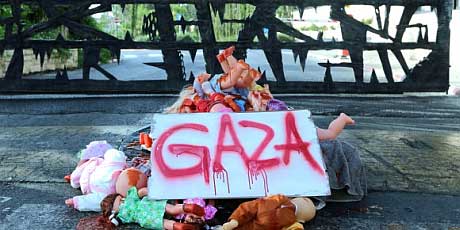 JEWISH PROTESTERS set fire to dolls to symbolise the children of Gaza to bring a glimpse of the horror that Gaza faces to Israel’s doorstep.

On 12th July 2014, a group called Jews Against Genocide (JAG) held a memorial service for Palestinian children killed by Israel in its current attack on Gaza. JAG set aflame to a pile of dolls covered in red paint at Yad Vashem, Israel’s holocaust memorial museum.

Jews Against Genocide (JAG) is a movement of Jews from all over the world, including Israelis, who are protesting against Israel’s intent to commit genocide against the non-Jewish indigenous people of Palestine.

It’s been more than 10 months since the dictator Musharraf destroyed the most important institution of judiciary using the state military power, supported well by the USA and other foreign powers not willing to give the Pakistani nation the right to live freely under the rule of law.

By not forgetting I mean to help the people who suffered and still suffering by any means you can (Actions or Words or Even Prayers).

In all our happiness and festivities we must not forget the lesson which Allama Iqbal taught us:

May Allah give us light and keep our hopes alive and make us more committed for the great cause and ultimate dream.

“My message to you all is of hope, courage and confidence. Let us mobilize all our resources in a systematic and organized way and tackle the grave issues that confront us with grim determination and discipline worthy of a great nation.” (Muhammad Ali Jinnah)