It is shocking and sad to hear about the brutal murder of PTI senior leader Zahra Shahid Hussain who was shot dead by two target killers in Phase 4 defence, in front of her house.
PTI is taking part in elections from that area. MQM, a known mafia type political party of that area is being accused by PTI and other opposition parties for massive rigging in the recent elections. MQM’s head Altaf Hussain, a British citizen, gave open threats of murder to his opponents in media and politics. He also threatened to separate Karachi from Pakistan. Its time for us to raise our voice against this British citizen and also raise our voice against British government which is harboring this mafia lord and a known mass murderer.

Report Zahra Shahid Hussain’s murder on the link below and also tell British police about the hypocrisy of their rulers who are hunting potential terrorists all over the world but harboring a mass murderer and a mafia lord in their capital city.

It is a shame for British government that they call themselves champions of democracy but they protect a person who openly rigs elections, threatens people if they don’t except his mafia type control over the city and kills them if they don’t obey him.

Also, its time to protest in front of British High Commission for harboring a terrorist and a mass murderer.

We also demand British civil society and media to support Pakistanis in the cause of peace and justice.

I think it is clear that PTI can only make government in KPK. It will be a split mandate and in sha Allah PTI will not join any status-quo party for power.

Situation is not ideal but everything is not lost. The good thing will be that they can still show performance in KPK. They can:

a) Eliminate corruption in KPK
b) Raise strong voice against this war and drones by passing resolutions and active protests on the streets or even blocking supplies
c) Strength the system of justice in KPK
d) Conduct local bodies elections
e) Help promoting peace and local businesses to improve employment situation
f) Make it a good place to invest for private sector especially in hydel power, gem stones, engineering etc
g) Give incentives to the private sector to invest in research and development through universities
h) Give results in other key areas which are part of their manifesto

In National Assembly, they can make strong noise on policy issues related to local and international affairs.

It seems, Karachi will still need to wait for a long time for any change. Karachi is again seeing rigged elections or no elections at all in many areas. There are reports of violence in areas like NA-255 and no elections in NA-250 and other parts of Karachi.

My experience as a voter at NA256-Meridian Grammar School polling station: Delayed start of voting. People with MQM badges openly moving in the polling station and making sure that their known voters get the chance out of turn for casting their votes while others get frustrated in heat. This will discourage new voters which are more likely to cast their vote for PTI.

Also inside polling station they are taking cards of old people and first timers to cast their votes.Those who knew what they are doing resisted but many dont even know what is happening. If this is happening in educated areas then forget about other areas.

MQM is a product of establishment and if America wants MQM so establishment (Army, rangers etc) will keep a blind on what ever MQM does.

Despite all this people should come forward and vote! Vote PTI in Karachi to show you are not sheeple. 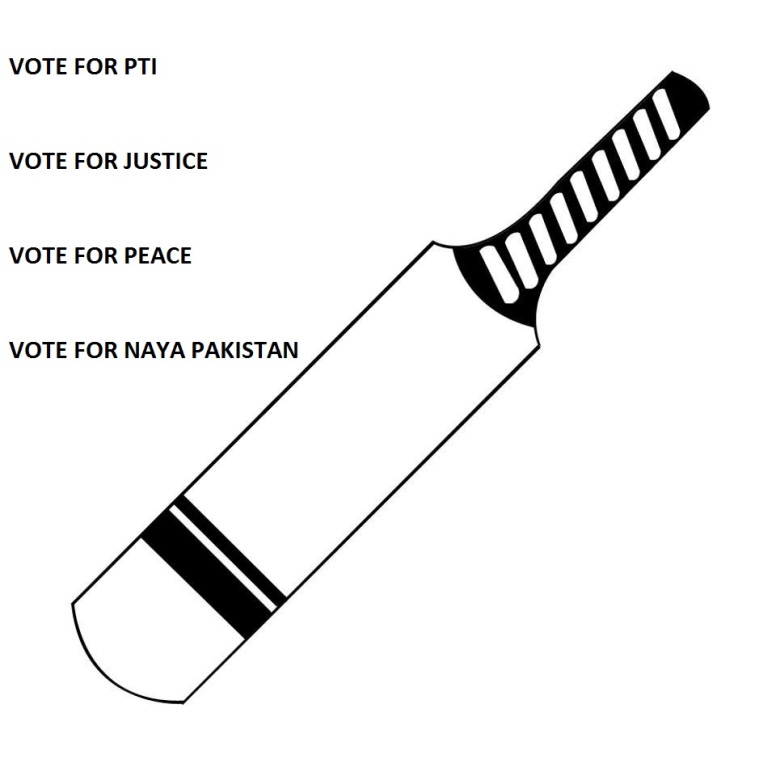 Some random comments on these elections

Need Change: Zardari and Nawaz Sharif are two big symbols of this political system. People need tos ee who is sticking with them as allies and who is taking a stand against them. People need to come out for a change and vote for Naya Pakistan and Vote4PTI. Reject these NRO and IJI-2(10 Party alliance) gangs.

People standing up above their prejudices: I am glad that some of my strongly religious friends who belonged to Shia sect are now not following Sajid Naqvi and others who are supporting PPP and MQM but they are now supporting PTI. Similarly some of my Deobandi friends have stopped blindly following their brand of sectarianism and instead of following Fazl ur Rehman type, they will now give votes to PTI. Similar is the case with some Barelvi friends. This is change as its not just feudalism and extortion mafias which are exploiting people. These fake fatwa factories are also exploiting the sectarian diversity and using it to strengthen their political and financial positions. In sha Allah PTI will get the chance and deliver good for the people and the country.

For Karachi: If someone can solve two major issues of Karach then its IK only. Two major problems of Karachi are:

a) Bring peace
b) Local bodies elections and decentralization of power

Military operations by PPP and PMLN governments were the reasons behind the start of ethnic violence as it provided more sympathies to MQM. ANP,PPP and MQM are major responsible of recent mess in Karachi. PMLN was ally of PPP in center when PPP took power in 2008 and they remained allies for a long time in Punjab. Bot PPP and PMLN avoided local bodies elections in last 5 years so one can get the idea what Karachiites should do?

MQM and JI are not major parties and they only work as proxies of PPP and PMLN respectively. PTI will be in a position to take independent position on the issues.

For IK haters: The thing is simple, whatever IK does and whatever social class background he has, he stands up above his social class prejudices of Mr/Mullah, Shia/Sunni,Muslim/Non-muslim or ethnic ones and supports justice and prosperity for all. This thing is lacking in so called religious and so called liberals of Pakistan a lot.

Comment on IK’s speech in grand finale of PTI 2013 election campaign:  I am glad that Imran Khan thanked people from all school of thoughts for praying for his health. Apart from many other reasons, I support Imran Khan mainly because he stands up above from his sectarian and social class prejudices and works for justice for all whether shia or sunni, whether muslim or non-muslim, mr or mullah, poor or rich and treats them like human beings. This is something which is lacking in fake liberal and fake religious parties.
My vote is for Justice and My vote is for BAT!